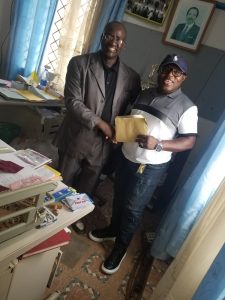 On the morning of January 6th, 2021, just one day after schools resumed for the term, a fire broke out in St. Martin’s dormitory. Thankfully, no student or staff was in the dormitory at the time, as they were in class around 9:30a.m. when it broke. About 70 students lost their property which was covered in flames. Initial investigation of the cause of the fire pointed to an accidental fire.

In swift response to the fire incident, SOBA America President Dr. Bertrand Fote and SOBA General President Mr. Sammy Pride Iyok made a personal donation of 70 mattresses to the students affects. A few other SOBANS joined in the effort. The gift was presented to the students and principal of SJC Sasse Fr. Armstrong Ndi on January 7th by SOBA General President Sammy Pride Iyok. Several SOBANS were part of the ceremony. President Iyok promised more assistance for the school with reconstruction efforts or the dorm that was destroyed.

SOBA America, in a gesture of goodwill, made a donation of 3.5 Million FCFA to the students affected. Each of the 70 students who lost property received a gift of 50,000 FCFA through their parents to assist with replacing essential items that they lost to the fire. President Fote noted that the immediate needs of the students is a priority. He thanked the board of SOBA America for unanimously approving that aid which was promptly sent to the Principal for distribution. President Fote noted that it was important that rebuilding efforts are focused on infrastructure that is modern and meets safety standards while still preserving the overall architectural outlook of the school campus. He has been in close collaboration with the Proprietor of SJC Sasse Bishop Bibi, school authorities and the president General of SOBA, President Iyok as they plan rebuilding efforts.

School Proprietor Bishop Michael Bibi visited the school to take a first hand look at the damage done by the fire. He was touched by what he saw and offered words of comfort to the students of SJC Sasse. He has already started looking into rebuilding work for the dorm, as he commissioned the engineers to start a review process of the damage and rebuilding costs.