On October 14th, 2020, SOBA America presented a gift of new sick bay to St. Joseph’s College, Sasse during a ceremony on the campus of SJC Sasse. The newly completed sick bay building was handed over to St. Joseph’s College, Sasse during a ribbon-cutting ceremony. Due to a scheduling conflict, Bishop Michael Bibi, proprietor of SJC Sasse was unable to make it. He was represented by the Chancellor of the Diocese of Buea, SOBAN Rev Fr. Emmanuel Ngwesse Epie.

The principal of Sasse College, Rev. Fr. Armstrong Ndi, and the Education Secretary of the Diocese, Fr. Michael Mbuwir Kengnjoh, and the entire staff and auxiliary staff of SJC were present. All students were equally present. SOBA America was represented by Emeritus Frederick Mafany Itoe, VPG for North America, and President Alain Taku, President for SOBA Western Region.
This handover event started with prayer followed by speeches from the Principal Fr. Armstrong Ndi, Education Secretary Fr Micheal Kengnjoh, Emeritus Frederick Mafany Itoe and the Bishop’s personal representative, the Chancellor of the Diocese, Fr. Emmanuel Epie.
Emeritus Itoe, who was the President’s representative and spoke on behalf of SOBA America. In his speech, he thanked Mr. Wilson DaCosta whose initial $10,000.00 donation in Dallas was the seed money which made the completion of the project possible. Other noted donors include SOBA PG Prof. Ephraim Ngwafor who personally donated 2M FCFA, Emeritus Frederick Itoe and SOBA General. Emeritus Itoe, on behalf of SOBA America, thanked SOBA UK, SOBA General and SOBA America who all contributed to this effort at some point to make this day possible. He echoed President Fote’s  gratitude to these players who helped see this project come to fruition. 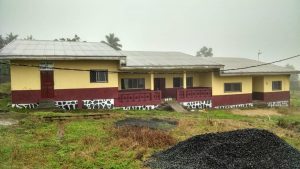 The inaugural traditional ribbon cutting was done by Fr. Epie, Fr. Micheal, Emeritus Itoe, President Taku and Fr. Ndi. Thunderous applause from the students and staff could be heard miles away as the cuts of the ribbon hit the floor. Next on the agenda was a tour of the facility. At the end of the tour of the facility, the Chancellor Fr. Epie thanked SOBA America for completing this impressive project with style. He expressed Bishop Bibi’s gratitude and best wishes to SOBA America and all those who helped make this project a reality. The ceremony ended with President Taku handing over the keys of the sick bay to the school administrators in the presence of the Chancellor, Education Secretary and Emeritus Itoe.
The sick bay project has had a long and rocky history. Together with SOBAN Joki Manga of SOBA UK, President Fote initiated this project back in 2006 when he was serving as Vice-President of SOBA America. After initial discussions in SOBA America, SOBA America recommended that other SOBA regional chapters be involved with another chapter taking the lead, as SOBA America was heavily involved in other projects. Eventually, SOBA UK agreed to take the lead. Initial contributions to kick start the project were made by SOBA America and SOBA UK. Several years later, the sick bay construction project got to a standstill after disagreements and other complications. The Itoe administration made a commitment to finally complete this project. President Fote expressed his delight that we have finally delivered and completed the construction project. “Now, we need to work on obtaining state-of-the-art health equipment for the sick bay so the students will be able to get the care they need,” he added.