On August 5th, 2020, SOBA America presented a gift of a state-of-the-art band and orchestra to St. Joseph’s College, Sasse during a ceremony on the campus of SJC Sasse. The gift, comprised of over 70 pieces of professional grade band and orchestra equipment and a 75 piece set of band uniforms was presented to the Principal of SJC Sasse Fr. Armstrong Ndi by SOBA America President-Emeritus Frederick Mafany Itoe. Bishop Michael Bibi, proprietor of SJC Sasse was on hand to witness the presentation. Several students were also present to witness the event and have a first look at the band before school resumes in September.

The band project was vision of Emeritus Itoe who put together a strong team during his administration to run the project. The band project team worked hard and raised thousands of dollars from multiple donors to see this project to reality. Beaurocracy in Cameroon compounded by the COVID-19 pandemic saw significant delays in clearing the container from customs since last year. Emeritus Itoe traveled to Cameroon in December 2019 to help release the container from customs. Despite the significant road blocks, he kept his pledge to do everything possible and stay in Cameroon until the band was released and delivered to SJC Sasse. President Fote thanked Emeritus Itoe for the huge personal sacrifice that kept him in Cameroon for over 8 months throughout this process leading to a successful customs clearance in early August. 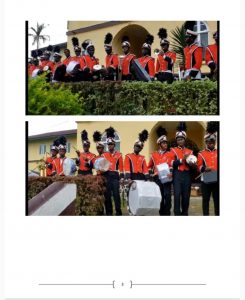 Students of SJC Sasse were clearly delighted to see the new band and orchestra. In a message to the principal of SJC Sasse on this occasion, President Fote urged school authorities to exercise good governance and upkeep of the equipment. He also expressed his hope that the school will invest in music instruction for students to take advantage of this opportunity. The Principal and Bishop expressed their gratitude to SOBA America and donors for this amazing gift.

President Fote and Emeritus Itoe wish to thank members of the SOBA America band committee for their hard work in seeing this project through. They also thank all donors to the band project for their kindness and generosity. They also send appreciation to SOBANS and donors for their patience during this long process. The band project committee will issue a final report on the project shortly. The President’s Office has been conducting a review of the project and will also issue a report as soon as possible.