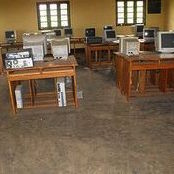 Dr. Nyambi Ebie, a Chicago based physician of the 1965 class conceived the initiative to bring computers into Sasse as early as 1985. It was not until 1993 following the creation of Soba USA, now Soba America that he was able to realize the project.

With six new color monitor computer, two laser jet printers and one Epson printer, Sasse became the first secondary school in Cameroon to boast of a computer lab. Named after Dr. Ebie’s father, The Geremiah Mba Ebie Memorial Computer Laboratory is a remarkable achievement of what Sobans and Soba can do for Sasse.