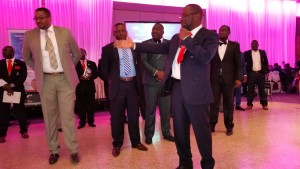 Sobans from the US, Canada and Europe turned out in record numbers for the 25th Anniversary Soba America Convention in Montreal from May 22-24, 2015. At last count, about 100 sobans were present in Montreal (a record!), many of whom came with their spouses. A large proportion also came to Montreal with the entire family (spouse and children) in tow, thus bringing the total number of delegates and family members who made the trip to Montreal to close to 200 (another record!)

The early bird evening took place on Thursday at the residence of the chairman of the 2015 convention, Chairman Paul Ayah. Delegates who had arrived town early that Thursday settled for dinner and a quiet evening of storytelling, catching up and meeting old friends in new ways not forgetting humour stories about our old days in Sasse. The evening ended at about 1:00 am.

The welcome evening was held at the Caribbean Paradise on Friday evening. In spite of the cold weather, every soban who arrived in town was present. Everyone was treated to refreshment, live performances and dancing in a cabaret-style setting until 2 a.m.

On Saturday morning, Sobans wives and children were treated to a sightseeing tour of Montreal. Forty-six women and children took advantage of this opportunity to discover all the cool places that have been features in the various editions of the Montreal 2015 newsletter: the old port, the Olympic stadium, Saint Joseph’s Oratory, the Notre Dame Basilica, etc including the Old Port of Montreal, down town and the Mount-Royal Park. The 3 hour tour was the convention highlight for the sobanese and soban children who were privileged to be part of it.

Saturday’s convention general meeting was another one for the record books as over 100 Sobans were in attendance to decide the destiny of the association. The usual general meeting business made way for the long awaited elections. At the end of the day, the well-oiled Mafany machine carried the day and will thus manage the destiny of Soba America for the next two years. The meeting also set a record for duration as it ran from 1 pm to 7:30 pm.

The Gala (Summit of the convention)

The gala was the culmination of Montreal 2015. How many people were there? 500? 550? The guess is yours. It was fun. Dinner was served, awards were given out, sobans sang the anthem, Missy BK performed, the sakerettes sang, the newly elected Soba America executive was presented and MC Tabu Bendrix was majestic as usual.

Finally a big Thank you to all Sobans, sobanese and soban children who found time from their busy schedules to drive or fly to Montreal for this special occasion. Montreal is come and gone but we will leave to remember in our minds that this was the first time ever that a convention has been organised out of US soil. For more details on the convention please visit www.sobamontreal.com