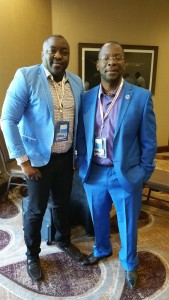 I arrived in Houston in the wee hours of Friday May 27, 2016 after my flight from Minneapolis had been delayed and the departure time moved twice. The two and the half hours flight was a bumpy one as Nimbus clouds settled over Southern Texas and refused to move. The forecast was for more storms in the afternoon and evening. Delegates from Canada and various parts of the U.S. to the 2016 Soba America Convention found themselves waiting for long hours at airports. Some were diverted to Austin to wait out the storm.  It was a relief to know that we all got to Houston safe and sound.

The headquarters for this convention was the Hilton Hotel in the stylish Westchase Business District of Houston. I hear the decision for this venue was a contentious one as some in the Houston Chapter were afraid of the cost and the possibility of not breaking even. Those who picked the Hilton and pushed for it to be the headquarters of the 2016 Convention did well.  The venue was elegant and appropriate to the re-branding of Soba America that the Itoe administration had been feeding us on the e-group since acceding to the helm of Africa’s best alumni association in America. Conveniently located off the Sam Houston Tollway and Westheimer Road, it was easy to get to from George Bush Intercontinental.

True to Texas, the Hilton Hotel Westchase is a humongous piece of property. With the main building housing the guest rooms standing 13 floors high and the 12,500 sq. ft. meeting and event facilities at its feet, the Hilton reminded me of Sasse by the Buea Mountain. Adorned by glass façade, floor to ceiling windows and chic décor, Hilton Westchase makes an impressive presentation to any visitor.

I walked into the Hilton on Saturday May 28, 2016 at a little before 11:00 a.m. and was directed to a hallway that looked nothing like the corridors of the Sasse’s main block but felt much like it. I got to the reception table to find no one in attendance. There was a young soban on a table peddling a book he had written about his days in Sasse. I took a look at the book and decided it was a little pricey. To my right was the door to the conference room. Standing at akimbo was a security officer. As I approached the door, he told me I have to present a badge before he could allow me into the meeting room.

A text message and moments later, Kingsley Ayangim, Soba America’s PRO came out of the conference room. After cross-checking my name on a master list, he retrieved an envelope that had my name and pulled my badge. He placed it on a name badge holder with a custom lanyard that had Soba America written all over it. He pulled out a device from a little box, turned it over, and wrote the serial number by my name on the list. He handed me the device and told me, that is what I will use for voting. I was also handed a copy of the Soba America Magazine, a booklet that contained all the meeting presentations and a souvenir digital clock that will be on my office table for a very long time.  I was happily amazed at what I was hearing and seeing.

I walked into an almost full conference room and a meeting in full session. A quick glance around revealed some familiar faces and the usual surprises of new faces attending a convention for the first time. A squint to my right and there were two tables dotted with white tea cups, glasses and pots holding coffee, tea and water. The entire setting was very professionally laid out for a conference.

I moved to the front and after a few handshakes took my seat. Mola Ndoko was moving the agenda along as I could hear him announce the next item. I could read what was going on projecting from the projector to the screen at the front of the room. When we got to the point of voting on any issue, Dr. Fote typed the issue on his lap top and it was projected to screen and we were all asked to vote using our voting devices which I now know is called a click pad. We were asked to press 1 for yes, 2 for no and 3 to abstain then press enter to record our choices. Instantly the results were electronically tabulated and appeared on the screen. Do not ask me how it worked. It was amazing to observe how effortless and time saving the entire voting process was with the use of technology and a click pad. My mind quickly ran back to the time consuming exercise of counting and recounting hands and challenges to the finally tally that was of conventions past.  Soba America had finally arrived.

The Chapter reports which used to take hours was a seamless exercise as the reports had been complied into a convention booklet for all to read later. A quick condensé and a few questions and answers were all that the chapter representatives had to do.  The various presentations flowed well and Mafany Itoe’s state of the association done from a power point was well delivered.

The lunch break started a little chaotic but thanks to the presence of three refectorians, we were able to organize ourselves to go to the table by classes and avoid any missile launches. In the end Houston had more than enough to feed sobans, their wives and children. When we returned to the deliberations proper, a few could be seen nodding from having eaten too much match. All said Houston and the Itoe administration delivered a professional convention deliberation worthy of our association.