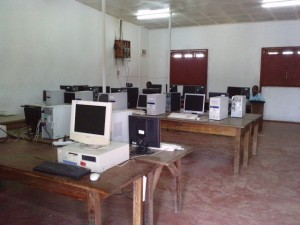 This started out originally as a Soba America project to put Sasse into the technology age after Dr. Ebie started the computer lab. Buea Diocese joined in the project to provide internet to the entire Diocese. Dr. Enongene was Soba America’s lead on the project and Valentine Itor was the resident engineer in Sasse. Dr. Enongene travelled to Cameroon numerous times in the early 2000s to meet with the Internet Project Committee, the PTA and Bishop Pius Awah.

It was resolved that to get the program rolling, the computers in the computer lab needed to be upgraded to at least Pentium II or III to enable compatibility. Soba America contributed 4.5 million Francs CFA to the internet project. 1.5 million Francs was used to buy refurbished Pentium II computers and 3 million Francs was used to set up a teaching lab for the start of computer science classes. With another $10,000 donated by Soba America, a VSAT internet system was installed in Sasse and went live in November 2005 connecting two teaching labs, 12 offices and the Father’s house to the internet. Sasse was into the internet age.