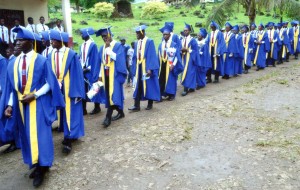 Seventy-four years after St. Joseph College, Sasse, Buea, went operational, this legendary college is still making waves. According to the Yaounde-based Association Terre d’Accueil, this catholic college in Buea Diocese, in the Education Category, is the best school across Cameroon for the 2012/2013 academic year.

This is the outcome of a maiden and glamorous award ceremony organized by the aforementioned association, recently, at the Yaounde Mont Febe Hotel dubbed The Men, Women & Institutions of Exception 2013. Before dishing out the awards to the carefully selected fifteen laureates, the President, Association Terre d’Accueil, Heffa Said Saibou, noted that they are out to celebrate hard work, patriotism, success and ethics.

Rev. Father Peter Nouck, Principal of Sasse College expressed happiness that his institution has been recognized. “We didn’t expect this award. But the jury members say we merited it. We’re happy and it is another challenge for us. Sustaining something that is great is the greatest of all challenges. We’re being challenged to do more than ever before.” he said.

Having scored a hundred percent in the Ordinary and Advanced Levels respectively, in the last three years, Fr. Nouck found the award a motivating factor as they warm up for the 2013 session of the GCE Ordinary and Advanced Levels. “We’ve done our part as human beings. The school year has gone very well so far. So, we leave the rest to God. God has been blessing us and this year will not be different. We’re hopeful that we shall have good results this year.”

A parent of Sasse College and Minister of Foreign Affairs, Prof. Pierre Mukoko Mbonjo, described the award as a national recognition of what Sasse College has been doing for the past 74 years. “This is a moment of joy and pride. I am part of the Sasse College family. I encourage them to be on the path of success and strife to be the best. A big round of applause to Sasse College,” he said. He enjoined the students of the College to keep working hard, be amongst the best and keep high standards for themselves, the school and the nation in general.

Another father of two sons in Sasse College, Mathieu Abega, Commander in the Cameroon Army, serving in the Ministry of Defense, said the award to Sasse College is not a surprise. “Everybody talks about the goodness of that college. The ex-students, SOBANS, are proud of their school. I was motivated by Mgr. Immanuel Bushu to send the first of my two sons to Sasse College when we were still in Garoua. Let the students continue to be disciplined. That’s the base of their success,” Abega added.

Amongst the other fifteen categories of award-winners were; Bernard Njonga for Civil Society Development, Janet Nkem, a Cameroonian at the UN, for her promotion of Women’s Rights, Albert Roger Milla, Cameroon’s most exceptional footballer, the Chantal Biya Foundation for their social and humanitarian activities in and out of Cameroon, Gilbert Tsimi Evouna, Yaounde Government Delegate for being exceptional in Urban Development, Canal 2 International for the best media house in Cameroon, Dr. Ernestine Ngwet Bell in the health sector for her relentless contribution in promoting fecundity, the Chinese Embassy in Cameroon for promoting partnership & development, and President Paul Biya for ensuring that peace reigns in Cameroon.