SOBA America has met its obligations to its members Dr. Roland Iboni (Dallas chapter) and Kenneth Ndele ( DC Metro chapter) who passed away late last year. In two separate occasions, SOBA America presented checks for $7,000 to the widows of the fallen SOBANS as a token of support in accordance with its by-laws. 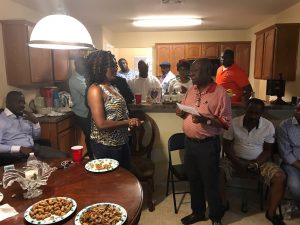 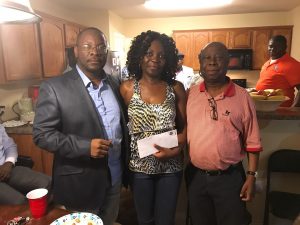 President Emeritus Dr. Nick Enow handed the envelope to her on behalf of the delegation. SOBANESE Florence could hardly hold back tears as she expressed her gratitude for the love and support her family had received from SOBA America during this difficult period.

SOBA America Vice-President, Dr. Bertrand Fote, led the delegation to the Ndele residence a little over a week later, on July 28th, 2017. Once again, the reception was one of great warmth as Mrs. Rosemary Ndele treated the SOBANS to a delicious meal after a brief opening prayer given by SOBANESE Laura Fote. Senior SOBAN Francis Elung gave a brief testimony of the gentleness and joy that the late Kenneth embodied, emphasizing his ever present smile. VP Fote, once again reminded Mrs. Ndele she is forever a SOBANESE and part of our family, before the delegation handed her the envelope.As the SOBANS sang the school anthem – Near the Buea Mountain – and the St. Joseph Song in honor of our fallen brother, it was clear that there was a lot of love in the house. 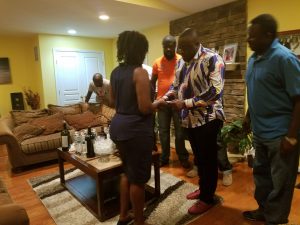 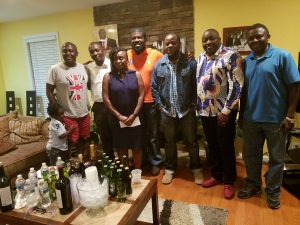 Both ceremonies were marked by personal stories about how the two fallen SOBANS touched the lives of the SOBANS present. Their widows were left with no doubt that their husbands were great men who embodied the true meaning of SOBANISM – being our brother’s keeper. Their contributions to SOBA America, its mission and vision, were highlighted once again during the ceremonies. Both Mrs. Florence Iboni and Mrs. Rosemary Ndele thanked SOBANS and SOBA America, from the bottom of their hearts, for helping ease the burden of their sorrow throughout this difficult time. They both expressed their gratitude for the prayers and support SOBANS and SOBA America have shown to their families.