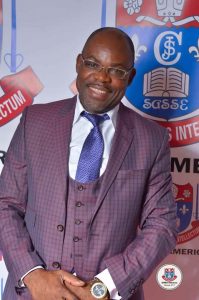 Congratulations to SOBA America’s Vice President Emeritus Dr. Kevin Njabo!!!
Kevin Njabo, assistant adjunct professor of environmental health sciences at UCLA, has been named a speaker for the TEDGlobal annual conference, which this year will bring together leaders who can shape the future of Africa.
Njabo plans to speak about how his life’s journey led the conservation biologist to become Africa director of the Congo Basin Institute, a UCLA project officially established two years ago in Cameroon as a base for scientific research and education in sub-Saharan Africa. Working with local communities, the institute provides high-level educational opportunities for African scholars — countering the brain drain that removes the continent’s best and brightest from serious regional problems such as food insecurity, infectious disease outbreaks and the effects of climate change.
Building on early successes — including establishing permanent, state-of-the-art educational facilities and reopening a long-shuttered rainforest research station — Njabo says the institute stands ready to transform the entire region and flip the traditional script.
“Let’s stop painting Africa as a continent of darkness,” said Njabo, who is a native of Cameroon. “The Congo Basin Institute is that vision that gives a positive outlook of what Africa can be.”
The talks take place Aug. 27–30 in Arusha, Tanzania, where Njabo, who is an assistant adjunct professor in the UCLA Institute of the Environment and Sustainability and the Fielding School of Public Health, joins a lineup that includes world-renowned scholars, entrepreneurs and the current presidents of Rwanda and Mauritius — Paul Kagame and Ameenah Gurib-Fakim.
Since its inception in 1990, TED talks have been watched more than a billion times, with individual talks often reaching millions of views.
It is worth noting that Dr. Njabo was recently in the new after being awarded the 2017 IoES Pritzker Environment and Sustainability Education Fellowship. This annual fellowship is made possible through an endowment from the Anthony and Jeanne Pritzker Family Foundation and recognizes instructors fro their contributions to academic programs.
President Itoe, the NLT and NEC extend their congratulations to Dr. Njabo for his wonderful achievements.
NB: Culled online.
Sobanly,
Liaison Office for Media and Protocol
National Publicity Secretary
SOBA AMERICA